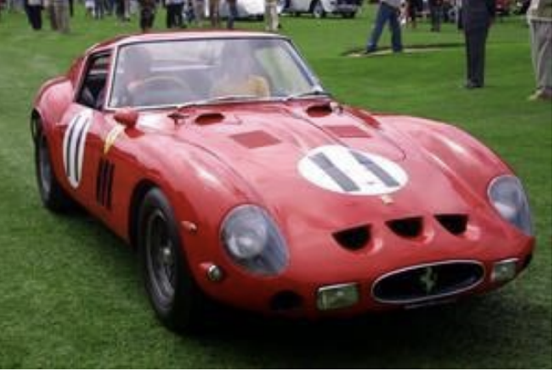 Completed in June of 1962, chassis 3647GT was destined for Col. Ronnie Hoare’s
Bowmaker racing team in England. It was raced by John Surtees successfully until he
suffered a major accident at Goodwood in August. Once rebuilt, this right-hand-drive
250 GTO was sold to a France-based Prince Zourab Tchkotoua from Russia, who
campaigned it at select events but had another major accident at Goodwood in 1963,
almost a year later to the day. Following the second rebuild, chassis 3647GT was
raced in Italian local events before it was sold to the United States.
The car presented by CMC was raced by John Surtees/Mike Parks with start number
#11 to a 2nd OA and 2nd IC finish at 1000km Paris, Montlhery on Oct 21, 1962.