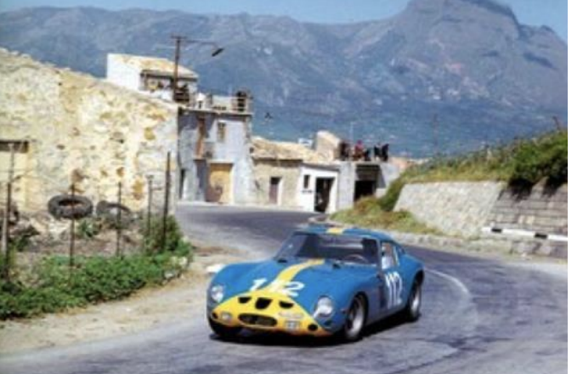 Italian privateer racer Sergio Bettoja was the first owner of this 250 GTO. He debuted
it at the Parma-Poggio hill-climb in June of 1962, and then sold the car to Count Volpi,
who promptly fielded it at Le Mans. In April of 1963, chassis 3445GT was sold to Ulf
Norinder, who had it painted in the Swedish national racing colours (blue with a
yellow central stripe) and campaigned it with some success well into the 1964 season
at Targa Florio, 2000km Daytona, 500km Spa and Monza. From 1965 onwards, the car
passed through various hands until 2012, when chassis 3445GT was entrusted to
Ferrari Classiche for a comprehensive restoration.

The vehicle presented by CMC was chassis 3445GT raced by Norinder and Troiberg
with start number #112 to a 9th OA and 2nd IC finish at Targa Florio 1964.