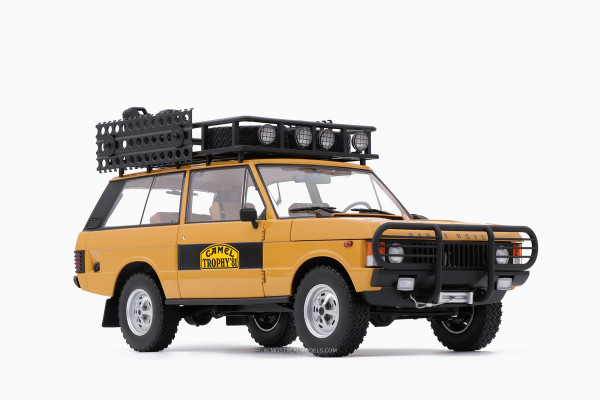 The “smoky” sponsorship of a cigarette brand birthed an enduring legacy of unsurpassed adventure across unforgiving global terrain. Craggy ravines, savannahs and swampy bogs with their voracious appetites, ready to swallow man and machine, failed to kill the living legacy resurrected again by Almost Real. Now, its long awaited 1:18 version of the Range Rover “Camel Trophy” Sumatra 1981 “Camel Trophy” Edition can journey to your collection, fulfilling that adventure niche of any collector’s heart.

The actual vehicle now known as the Range Rover Classic began in 1970, (100 wheel base, 2540 mm). The “Camel Trophy” originated in 1980 with Jeep-equipped vehicles exploring the Amazon basin, then turning to Land Rover for sole vehicular support and other sponsors over the next 20 years using heavily modified vehicles. Old footage of these muscled machines, at times winching their way through near impassable terrain, will stir story after story.

This 1:18 Range Rover “Camel Trophy” Sumatra 1981 will turn heart and head toward adventure. A detailed top carrying rack with opening cases stage any journey, as will the auxiliary fuel tanks, rubber spare tires and portable “tracks” to help ford crag and bog. A total of 6 headlamps portray its blast of illumination into looming, unexplored darkness. An intricate working suspension manages the forced contortions of any terrain, while testing its treaded, actual rubber tires guided by a functioning steering system. A substantial front-mounted winch stands ready to move its weight from any peril. In Almost Real tradition the engine compartment is resplendent in detail as is its interior, also unsurpassed in life-like quality and dimension. There is no question that Almost Real “wins the Camel Trophy” in the offering of this legacy Range Rover “Camel Trophy” edition. The question is, “Will you begin the trek?”