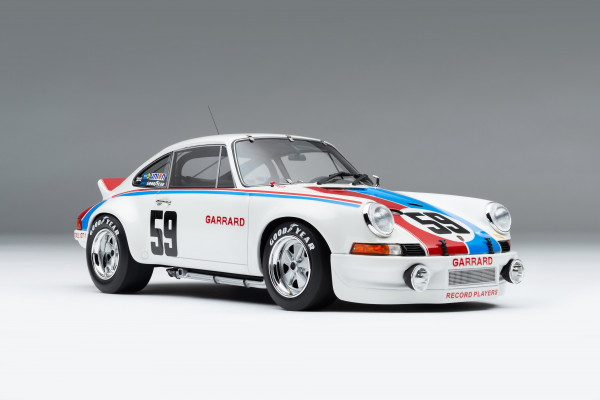 Each one of this Limited Edition of 200 models has been individually signed by Hurley Haywood.  Hurley sat behind the wheel of the BRUMOS 911 RSR #59 in 1973 to take the first of his five 24h of Daytona wins. The original car was shipped back to Germany to undergo tests but was later destroyed and lost forever.  In order to ensure accuracy in the details of the model we have had the invaluable assistance of the Porsche Museum with archive images and feedback. With its 2.8litre air-cooled, naturally aspirated, flat six engine, the 1973 911 RSR was a significant step forward when compared to the 911 RS of the time.

The RSR was notably wider in the front and the rear compared to standard 911s and the fibreglass front bumper had the signature single central air intake for the large oil cooler, which would allow the rear engine to produce 280bhp at 8000 rpm and let the RSR sprint from 0-100km/h in just 4 seconds. These impressive figures made it to a true legend in endurance racing and set the standard for the 911’s ongoing success in motorsport. This fine 1:18 scale model of the 1973 Porsche 911 RSR has been handcrafted in our workshops.

The model is supplied in a luxury black box with a protective outer carrying sleeve. Each model is mounted on a polished black acrylic base protected by a clear acrylic dust cover. The base houses a folder containing the certificate of authenticity along with a little information about the car. The model title and original branding, along with Hurley’s signature, is displayed on a polished stainless steel plaque mounted at the front end of the base.